The weighty issue of the portly pet 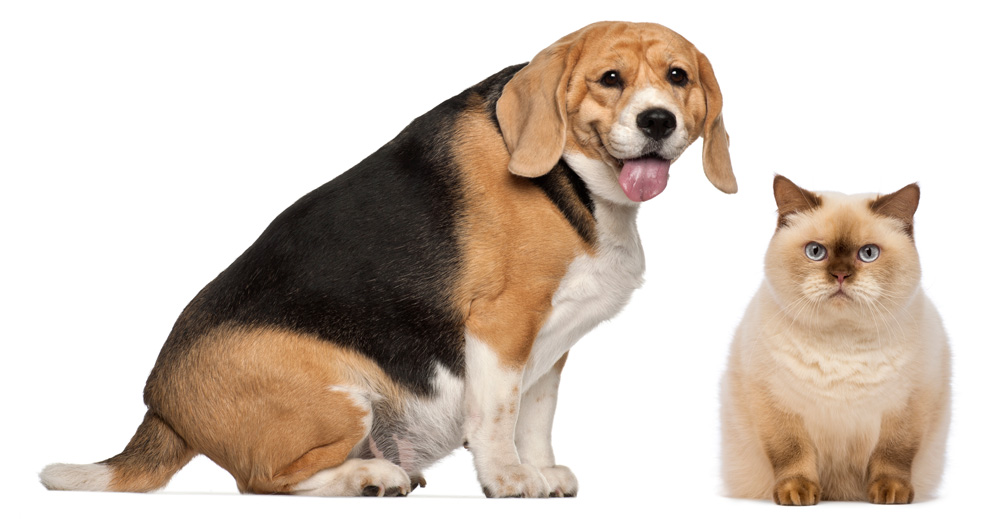 Our pets are mirroring the human obesity growth curve, and very overweight cats and dogs are becoming common. As in humans, being overweight can cause many health issues for our pets. These include:

The term obesity is used to describe a condition that is more serious than just being overweight. When a dog or cat is classed as obese, it means that their fat has now reached the stage where their bodies struggle to maintain good health.

In 2018, results of an online survey* suggested that around 59% of dogs and 53% of cats throughout the world are obese. In fact, this rapidly increasing problem is now so significant that the World Small Animal Veterinary Association have officially classed canine obesity as a disease.

But it’s not always obvious to us…

This survey also showed that only 24% of owners thought their pet was overweight. This suggests pet owners not realising that their pet is obese has also become a big part of the problem. When you see your pet every day, and pets around you are slowly getting bigger too, a larger size becomes normal.

Why is obesity becoming more common?

The science behind overweight pets is usually as simple as it is in humans – more often than not a pet is obese because they’re eating more calories than they’re burning off.  There are occasions where genetics or other health factors play a part, and some breeds are more likely to gain fat than others. There might also be some medical reasons that are contributing, for example, undiagnosed joint pain restricting their movement, or an underactive thyroid slowing down their metabolism.

Before starting your pet on a diet or increased exercise schedule, you should book a FREE weight clinic check-up with one of us to make sure there aren’t any underlying medical issues.

Don’t forget that if you’re a member of The Castle Club you'll already have a full health check with a vet every year, and one six months later with a nurse. Plus, you can arrange for a weight check or weight clinic FREE OF CHARGE whenever you feel you need it.

Not already a member?

Find out more and Join today

How do I know if my pet is overweight?

There are some visual checks you can do at home that will give you an idea of their condition:

I think my pet is overweight. What should I do?

More pets are being fed complete diets in the form of biscuits, and this has resulted in well-nourished animals, as the nutritional quality of the food makes sure they get all they need. The downside of biscuits is that it’s easy for us to fill their bowl each day as that seems like the right amount to give them, and it’s often way too much.

To ensure they aren’t consuming more calories than they need, check the pet food packaging. Many pet foods come with a cup with a portion size printed on the side. If not, weigh the food using kitchen scales until you get an idea about how much they should have each day, then split that across their meals.

Take care with extra treats! For a small dog, one biscuit can be the additional calorie equivalent of a burger.

Below is a comparison of some common treats for pets in human terms: 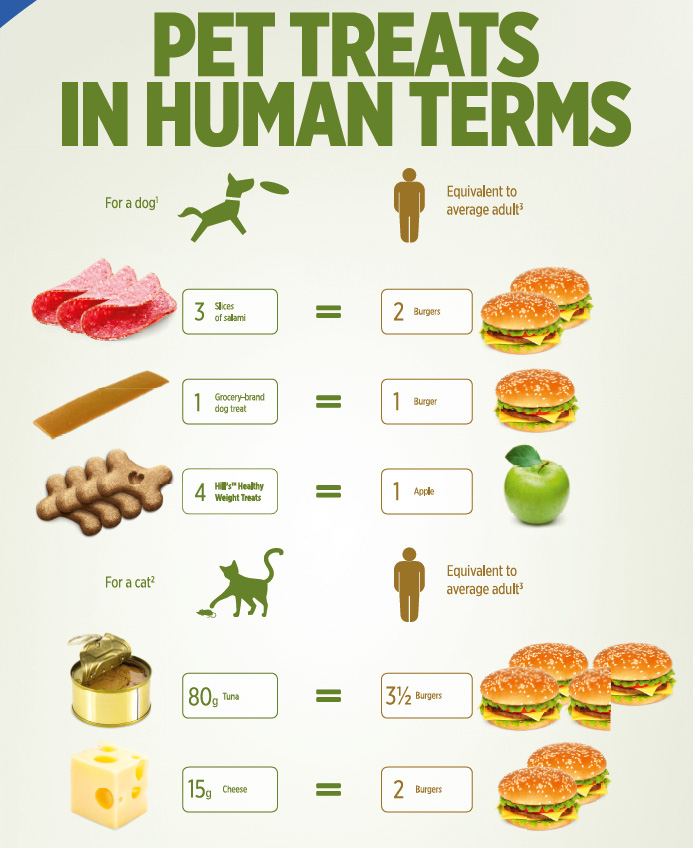 How much exercise should pets have?

Dogs need to be walked every day, although the amount of exercise they need varies depending on their breed, age, size and general health. Your dog should be either walking or running for between 30 minutes and two hours daily. Hunting and working breeds need the most exercise and plenty of time to run around and explore off the lead.

Cats will only do exactly what they want when they want. This includes active time, and they’ll control their own, although you can encourage them to want to move around by getting some irresistible-to-cats toys – lights that move around, balls to chase around tubes, feathers on sticks, and small cat toys are often enjoyed but try a few and see which ones result in a playful cat.

As many of us know from personal experience, losing weight can be boring and difficult. It’s much easier to maintain weight by making tweaks to food intake and exercise when needed, and better for long-term health too.  It’s also good to have support, as denying your pet simples pleasures can be as hard for us as it is for them, even when we know we’re doing it because we love them. That’s where our weight clinics can help…

FREE weight clinics for our clients

Our pet weight clinic aims to improve the health and overall fitness of your pet. We do this by holding regular appointments with our friendly and non-judgemental nurses in which we weigh and measure your pet and discuss diet.

We will track your pet’s weight loss over time by measuring your pets neck, widest part of the chest and waist. We also weigh and body condition score to build up a full picture of their overall progress.

With your consent we also take pictures before, during and after weight loss as it’s not always easy to see the progress when you see them every day.

If you think this service would be useful for you or you’d just like to check that your pet is the right weight, call to make a free appointment on Dorchester (Poundbury) 01305 267083 or Weymouth 01305 81330

Don’t forget that if you’re a member of The Castle Club you'll already have a full health check with a vet every year, and one six months later with a nurse. Plus, you can arrange for a weight check or weight clinic FREE OF CHARGE whenever you feel you need it.

Not already a member?

Find out more and Join today

Did you know that pets, as well as people, can respond really well to acupuncture?

We’re delighted to now be able to offer this ancient Chinese therapy as a holistic supplement to traditional veterinary care. Veterinary acupuncture can be particularly useful when dealing with mobility issues, chronic pain conditions such as joint pain, and gastrointestinal issues. It’s an ideal treatment for older, geriatric pets who can find the therapy quiet calming, although it’s a useful complementary treatment for all life-stages.

Veterinary acupuncture is thought to work in a few different ways:

Vet Alice Moore, who joined us in April, has been treating patients with acupuncture for a number of years.

“I find veterinary acupuncture to be useful in treating a whole range of conditions” says Alice. “Owners are often surprised that cats, dogs and rabbits all tolerate acupuncture really well and I have used it to treat back pain, arthritis, bladder problems and all sorts of lameness issues”

Here are some photos of Raz and Monty who are both being treated at our Dorchester clinic.